Not quite like any other, the story behind Chain of Life is punctuated with synchronicity and marked by generosity and altruism. It is a story of hope.

It all started in 2004 when a young Ontarian, Kristopher Knowles, visited a Secondary II English class to talk about the shortage of organs. Kristopher, who was waiting for a liver transplant, had been invited to carry the Torch of Life across Canada. A student, Josianne Sirois, was particularly moved by his message. A seed was sown.

Two years later, the Step-by-Step launched a contest across Canada inviting students to find a way to raise awareness about organ donation among young people. Josianne shared her desire with her teacher to create a website about the challenges of those waiting for a transplant. That teacher, Lucie Dumont, immediately realised how amazing this project could become if a pedagogical component designed especially for ESL was added. And the rest is history…

Over the course of time, Lucie met Linda Béland, who told her about her son, Vincent, who had died in a climbing accident, leaving the family with the difficult decision of whether or not to donate his organs, without knowing what his wishes would have been. "Vincent’s Story" has become a key element in the unit.

At about the same time, Doris Rainha, a teacher who was field-testing the unit, was about to witness an improbable turn of events. One of her students, Stéphanie Tapp became particularly passionate about the importance of organ donation. She told her mother that, should the situation arise, she wanted her organs to be donated. After initially refusing Stéphanie’s request to sign her organ donor card, her mother finally accepted her daughter’s wish as a selfless and generous act. Two weeks later, Stéphanie died in a car accident. Thanks to Chain of Life, her parents, still in shock, remembered what Stéphanie wanted and agreed to donate her organs. Four lives were saved.

"Stéphanie’s Story" not only confirms the relevance of the Chain of Life project, it also demonstrates how family discussion facilitates the decision relatives are called upon to make and it provides a certain peace of mind and comfort in their grief.

The pedagogical unit also contains an interview with Hélène Campbell, a young woman who received a lung transplant. Since the interview is conducted by Josianne Sirois, we can say that the project has come full circle!

Chain of Life is a work of passion and perseverance that captivates the hearts of all those who discover it. 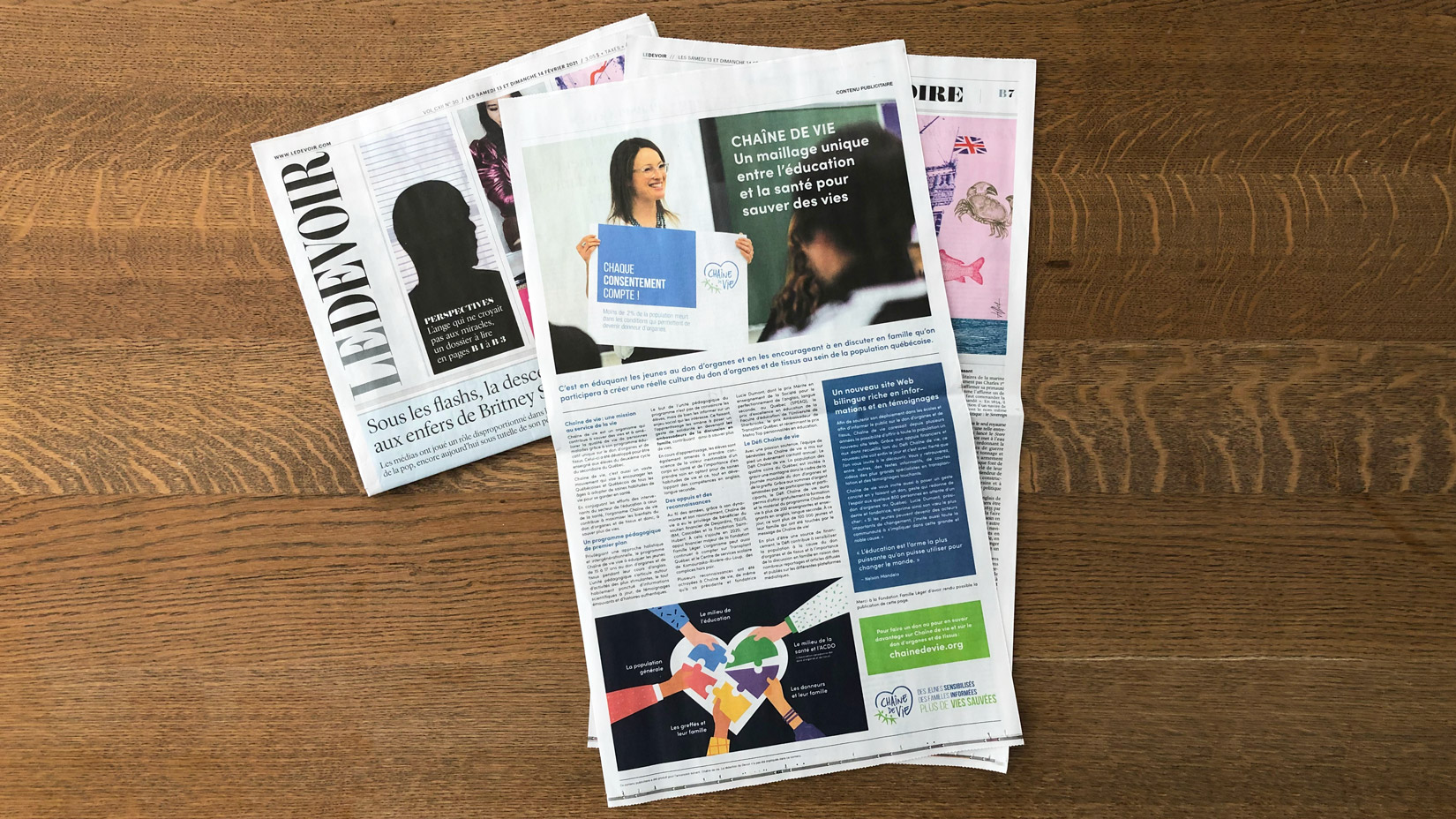 Chain of Life invites Quebeckers to make the ultimate gesture of love by sharing their wishes...